Honey Jo came into my possession when I was around 8 years old. My memory of it is pretty foggy but I recall being in the parsonage basement for a church auction. There were a bunch of items displayed on tables and everyone had fake money and they were raising their hands and calling out numbers. Quite frankly, I was bored to tears.

But then I saw a big teddy-bear on one of the tables and decided that I wanted it. When the time came I kept raising my hand and shouting numbers…I had no idea what was going on. There was at least one jerk that kept bidding against me, a small child, but others were frantically shoving their fake money at me as I kept raising my bid. In the end, the bear was mine, although I’m not certain how legitimate it was. Someone probably told that other loser to knock it off and let the poor little girl have the bear. Jesus loves you. Hallelujah and Amen.

The bear’s name was Honey Jo. I’m assuming that was the name on the tag because I know that I didn’t name him that myself. I was happy with my bear. He was a cuddly, snugly, armful of goodness…perfect for hugs.

But shortly after bringing him home, something just wasn’t right. Honey Jo just didn’t seem like a boy to me. He just didn’t. So after much contemplation, I did what any good teddy-bear mommy would do…

I had his bowtie removed. 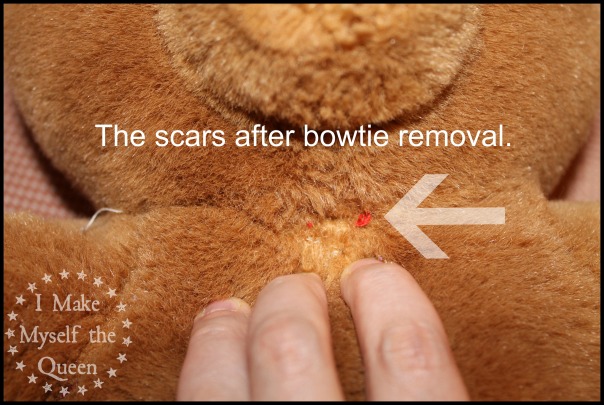 The bowtie removal surgery left a few small scars. Then the bow was reattached to the ear as a lovely “hair”/ear bow. And Honey Jo became Honey Joanna.

…except he didn’t really. I never could bring myself to call him “Joanna”, and I was always confusing my pronouns. To this day I refer to Honey Jo as “him” more often than not. This upsets my daughter who now shares a room with Honey Jo but doesn’t know anything about his/her past. To her, Honey Jo is clearly a girl.

Whether I mix up my pronouns or not, Honey Jo loves me no matter what and is a beloved toy and trusted stuffed friend.

And he still gives the best hugs.

This post is linked to…
Mama Kat’s Writer’s Workshop 4.) A childhood toy you once loved.

I Make Myself the Queen is an itty-bitty newborn blog. Please be gentle with it, wash your hands before touching it, and be sure to come back often to tell it how cute it is!

Jenn is a bored and sarcastic divorced mom of two who blogs and vlogs because the voices in her head tell her to. She blogs about as often as she showers, which isn't very often. Author of jennrian.com and funanddysfunction.com (coolestfamilyontheblock.com)
View all posts by Jenn Rian »

Posted on January 9, 2014, in About Me, Childhood, True Stories, Writer's Workshop and tagged childhood, writer's workshop. Bookmark the permalink. 13 Comments.